Protection of faith and service to the poor

This ancient motto of the Order of Malta goes right back to the first known Rule of the Order (written between 1125 and 1153 AD), which refers in its first chapter to the members of the community as "fratres ad servitium pauperum venientes" (Brothers, who came for the service of the poor).

Only later editions of the Rule change this into "fratres accedentes ad obsequium pauperum et tuitione fidei catholicae" (Brothers coming for the service of the poor and protection of the catholic faith). This later addition of "protection of the catholic faith" as second task of the brothers obviously refers to the military responsibilities, which the Order has taken on since 1131. Ever since "tuitio fidei et obsequium pauperum" was used like a motto of the entire Order. It would be too simplifying, though, to divide strictly in "tuitio fidei" and just taking it as a synonym for the military role of the Order in the course of history and "obsequium pauperum" as the common denominator for all activities of hospitality. Both elements cannot and must not be seen apart from or independent of each other. In other words: The special charisma of the Order of Malta is the amalgamation of "tuitio fidei" and "obsequium pauperum". We defend the faith through our service for the poor and our service for the poor strengthens our faith.

As the military tasks of our Order have neither subsisted, nor become superfluous, just the weapons have changed. It is difficult for us today to understand the use of swords, canons and galleys as means of defense of our faith in the past. We must, though, understand that the people in the Middleages were also children of their time and in their conception of morality it was considered a legal and necessary means of defence to wage war. The sword to fight the infidel has been replaced by a more tolerant attitude and the conviction, that defending our faith in our days is to be done by giving credible witness of our faith in worship, education and works of charity.

"Tuitio fidei" has nowadays gained a new meaning and describes the spirituality, i.e. the religious sphere, which generates, enables, inspires, strengthens, guides and completes our charity work, the "obsequium pauperum".

The sources of our spirituality

The main source of our spirituality is the Rule, which dates back to the time between 1125 and 1153 AD, established by Raymond du Puy, the direct successor of the founder of our Order, Blessed Gérard.

The elements of our spirituality

Our relationship to God

Joining the Order means a dedication of oneself as an offering and sacrifice to God, i.e. making oneself available to God to be used as a tool of his love and such being sanctified by his grace.

Our worship and liturgy

Our life must be a dynamic praise of God. Thus public worship is an integral part of our life. Ever since the foundation of our Order liturgy has not just been an activity of our community of brethren, but also an indispensable part of holistic care for the poor and sick. Already the hospital in Jerusalem had been considered a spiritual community, where brethren and patients prayed and worshipped as one family together.

Our relationship to the Poor and Sick

The Rule refers to them as the "Poor of Christ" or the "Poor of Our Lord". They belong to our Lord Jesus Christ and they are to be treated like the Lord himself (cf. chapter 16 of the Rule). They are called "the Blessed, our Lords, the sick". The members of the Order made the promise "to be servants and slaves to our Lords, the sick." The brothers on the one hand and the sick on the other hand, are mutually representing Christ, making life in the community of the hospital a mutual encounter with the Lord and therefore an event of salvation.

There are three classes of members of our Order today: These, who make the Religious vows of poverty (living without individual property), chastity (celibacy) and obedience to the superior. They are called Knights of Justice and are Religious like the professed members of any other religious order. The second class are members, who pronounce a promise of obedience to live in the spirit of our Order. We call them Knights in Obedience. The Third Class are members of Honour and Devotion, who support the Order to the best of their abilities.

[The Saints of the Order of Malta]

The patron Saint of our Order is St. John the Baptist since the church at the foundation hospital of our Order was dedicated to him.

We also have a special devotion to Our Lady, Mary. Liesse and 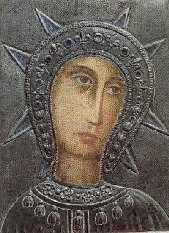 Philermos are the main Marian pilgrimages in our history and Lourdes is the centre of our Marian devotion today.

Our Order is blessed with several members, who have been officially canonised (proclaimed as Saints) by the Church:

Not yet canonised are the Blessed of our Order: 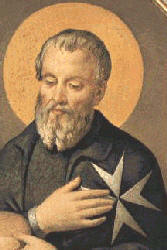 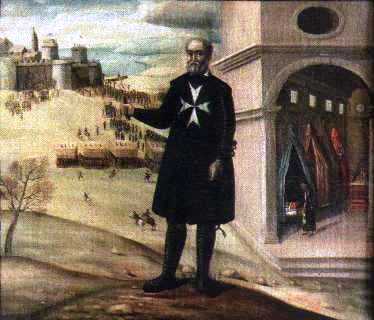 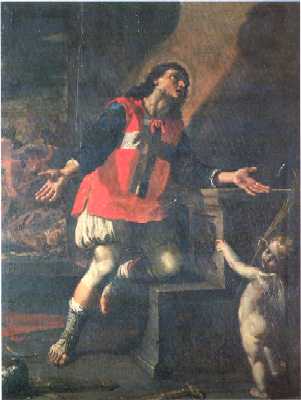 Our Charity work and hospitality

Although it is an integral part of our spirituality, it will be dealt with in a separate page about "obsequium pauperum".

Back to the SMOM page of the